Acupuncture and Down Syndrome 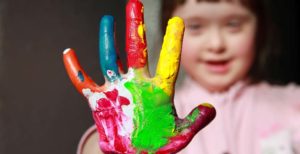 Down syndrome is a genetic disease that affects around 6,000 babies every year in the United States. The cause of this disease is still unknown but science is learning more every year. The disease was officially discovered in 1866 by John Langdon Down, an English physician. There are three types of Down syndrome: nondisjunction, translocation and mosaicism. Nondisjunction, or trisomy 21, is the most common form. This type of Down syndrome is caused by an error in cell division during development. In trisomy 21 the embryo ends up with three copies of chromosome 21 instead of the two normal copies. Down syndrome causes distinct facial appearances and intellectual disabilities, as well as many other developmental problems.

In Traditional Chinese Medicine, there are acupressure points located along energetic pathways or meridians. Each of these meridians is associated with an internal organ. And every meridian has its own set of properties because of the organ it is associated with. TCM treats any kind of genetic disease as a disease of the kidney energetic meridian. When the energy of the kidney meridian or Qi (pronounced “chee”) is weak, it means there is a deficiency of yang in the body. This can lead to an overabundance of dampness. In Down syndrome sufferers, this can manifest as poor muscle tone, a puffy face and protruding tongues. An overabundance of dampness can also affect people mentally, causing learning disabilities and emotional outbursts. Over time, the dampness creates blockages that build up and generate heat. This pattern is characterized by restlessness, overactivity and red cheeks.

Acupuncture is one way to help manage the symptoms of Down’s syndrome sufferers. There are multiple acupressure points that can be used to decrease the aforementioned symptoms and make life much more bearable for Down syndrome patients. These acupressure points can be used alone or in conjunction and many of them can even be stimulated without actual acupuncture needles. For instance, there is a point on the top of the head that can help with restlessness, as well as improving memory and cognitive performance.

Certain herbal formulas can also be very beneficial to the patient. These formulas treat the symptoms and the root cause of the disease from the TCM viewpoint. As mentioned beforehand, TCM views genetic disorders and a deficiency of kidney yang. To combat this, a TCM practitioner might suggest using herbs such as angelica root, cinnamon and Chinese yam in a combination that will increase the kidney yang over time.

Lastly, nutritional counseling may be required to help treat Down’s patients. Foods cold in nature, such as watermelon, cucumber and dairy products are not good choices because they further deplete the kidney yang and increase the dampness within the body. But as with every type of food, moderation is the key.

While there is no cure for Down syndrome, it is a disease that has become much more manageable. And because of medical management through methods such as acupuncture, the life expectancy and the quality of life for Down’s patients can be improved greatly.

Acupuncture and Down Syndrome was last modified: October 4th, 2017 by bryce